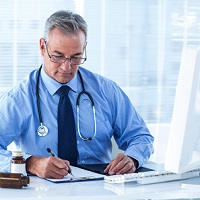 There currently is abundant data on the trends and seasonal variation of chronic obstructive lung disease and asthma. However, more recent data for interstitial lung disease still needs to be elucidated.

In the study, planned for presentation at the American Thoracic Society (ATS) 2020 International Conference this year,, the investigators examined all cases with the International Classification of Diseases (ICD)-9 or ICD-10 codes of interstitial lung disease of any cause from the Nationwide Inpatient Sample database.

Between 2006-2016 there was a downtrend in all-cause hospital admissions. However, in-hospital mortality rates did not change, with or without the presence of pneumonia.

In addition, the seasonal variations of hospital admission rates and mortality rates were not changed by infectious pneumonia cases being ruled out.

In 2018, researchers found the presence of nearly any gram-negative bacteria is likely a risk factor for worse clinical outcomes in patients with interstitial lung diseases.

A team of investigators from Beaumont Health Systems in Michigan reported that patients hospitalized with ILD face worse outcomes in mortality, intensive care unit (ICU) admission, and vasopressor use rates in the event of any gram-negative bacteria infection, excluding Pseudomonas Aeruginosa (PA).

Led by Hira Iftikhar, MD, MBBS, investigators were working with the already evidenced fact that respiratory microbiome alterations are a predisposing factor for ILD. They instead sought to uncover the influence of bacteria’s virulence on such patients’ clinical outcomes, particularly in a hospital setting.

The most common diagnoses among the admitted patients were idiopathic pulmonary fibrosis (40.6%) and Sarcoidosis (27.6%). The plurality of observed respiratory isolates were PA (38.8%), MRSA (26.5%), and other non-PA Gram-negative pathogens (17.6%). Investigators noted that the use of immunosuppressant medications or anti-fibrotics did not influence the development of resistant pathogens.

However, the new data shows some positive annual data in this patient population.

The abstract, “Trends and Seasonal Variation of Hospitalization and Mortality of Interstitial Lung Disease in the United States from 2006 to 2016,” was published online by the ATS International Conference.


Brought to you by: