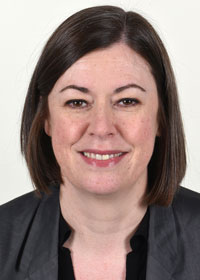 Treatment with the P2X3 receptor antagonist MK-7264 (formerly AF-219) reduced cough frequency by 37% compared with placebo for patients with refractory chronic cough, according to a phase 2b study presented at the 2017 ATS International Conference.

The reduction in cough, which was seen with the 50-mg dose of the MK-7264, was accompanied by a 31.1 mm decline in cough severity on the visual analog scale (VAS) compared with placebo (P = .0003); however, nearly three-fourths of patients complained of adverse taste effects. Lower doses of the medication also proved effective, with fewer taste effects.

Neither of these findings were statistically significant, given the small sample size and an unexpected placebo effect, Smith noted. In the placebo group, there was a 15.2 mm change from baseline in VAS. Future studies will be powered to better measure significance in these groups, she noted.

“There is a significant unmet need for effective treatments for chronic cough,” Smith said in a statement. “We are encouraged by the results of the MK-7264 study and look forward to further evaluations of this investigational therapy.”

Merck, the developer of MK-7264, will be discussing the phase 3 development plan for the P2X3 inhibitor with regulatory agencies later this year, according to a statement from the company. A phase 1 study is also assessing MK-7264 as a potential treatment for renal insufficiency.
Smith JA, Kitt MM, Morice AH, et al. MK-7264, a P2X3 Receptor Antagonist, Reduces Cough Frequency in Patients with Refractory Chronic Cough: Results from a Randomized, Controlled, Phase 2b Clinical Trial. Am J Respir Crit Care Med. 2017;195:A7608.

You May Also be Interested in
Most Popular
The Fear of the Coronavirus, and the Reality of the Flu
Psoriasis Increases Cancer Risk
Dulaglutide Receives FDA Approval for Reducing MACE in Type 2 Diabetics
Navy Medicine: A Strategic Roadmap for Implementing a Virtual Mental Health Program
Top 10 Painkillers in the US