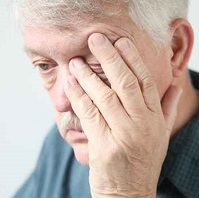 Excessive daytime sleepiness related to severe obstructive sleep apnea is also linked to depression in men, reported a team of researchers from Australia.

In an abstract presented at the 2015 American Thoracic Society meeting in Denver, CO, Carol Lang, PHD of the University of Adelaide, Australia and colleagues said they looked at a group of 1,875 men ages 35 to 83 who had been assessed for depression during a 5-year period.

From that group they selected a random sample of 857 men who did not have previously diagnosed obstructive sleep apnea (OSA). As controls they also included 1,660 men without depression.

The subjects had at-home polysomnography and completed the Epworth Sleepiness Scale questionnaire.

After adjusting for potential confounders, the researchers found severe OSA was associated with an increased prevalence of depression and that men who had both previously undiagnosed OSA and excessive daytime sleepiness had a 4 to 5 times greater chance of being depressed.

“Men presenting with depression should be screened for OSA so that appropriate course of treatment can be planned,” Lang concluded.