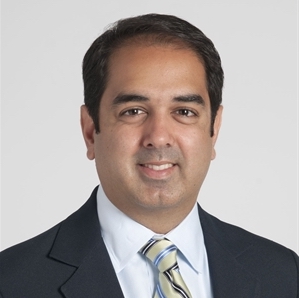 The use of intravitreal aflibercept injections (IAI) met primary endpoints for the prevention of macular edema post-cataract surgery in those suffering diabetic retinopathy, according to Rishi Singh, MD, of the Cole Eye Institute at the Cleveland Clinic (pictured).

The injection did not show a significant number of adverse events, nor were there meaningful differences in the average gains in visual acuity or central subfield thickness (CST).

“The study basically found a significant number of patients developed macular edema following surgery,” Singh told MD Magazine. “In the sham arm, about 50% of patients developed macular edema, if you lose a couple different criteria definitions for that, and for those patients in the aflibercept arm, the rates were much, much lower, in the 10% to 14% range.”

Patients were randomized 1:1 to 2 study arms: One receiving IAI, and the other a placebo injection, at the time of cataract surgery. Both groups were examined at day 7, 30, 60, and 90 following the surgery.

While aflibercept did not show significant differences for the duration of the 90-day trial, at day 90, 38.5% of those receiving aflibercept were 20/20 or better compared to only 11.1% in the placebo group.

“We did see anatomical benefits, and probably the one that I think is the most important benefit of this study was those patients were 20/20 following surgery,” Singh told MD Magazine. “In those groups, a significantly higher percentage of patients in the aflibercept arm were 20/20 or better following surgery versus those in the sham-treated groups.”

“Those patients achieving 20/20 or better visual acuity are probably more likely with the drug than without based on what we’ve seen from the phase 2 study,” he added. Singh, R. (2017). Prevention of Macular Edema in Patient with Diabetic Retinopathy undergoing Cataract Surgery with Intravitreal Aflibercept Injection (PROMISE). Presented at: 35th Annual Meeting of the American Society of Retina Specialists; August 11-15, 2017; Boston, Massachusetts.

You May Also be Interested in
Most Popular
The 10 Worst Things Patients Can Say to Physicians
Filtered, Unfiltered Coffee Have Contrasting Impact on Heart Health
Erin Crown, PA-C: Using Telemedicine to Help Schizophrenia Patients
Looking for Links Between Testosterone and Vitamin D Levels
Top 10 Painkillers in the US