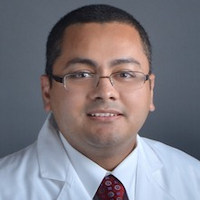 Phase 3 trial results comparing relapsed or refractory multiple myeloma treatment with carfilzomib, dexamethasone and daratumumab, versus carfilzomib and dexamethasone, showed that adding daratumumab led to a 37% reduction in the risk of progression or death.

At the American Society of Hematology (ASH) 2019 Annual Meeting in Orlando, Saad Usmani, MD, from Atrium Health in North Carolina, and colleagues presented a comparison of the treatments in 466 patients from 102 sites around the world—312 were randomized to be treated with carfilzomib, dexamethasone and daratumumab, while 157 were treated with carfilzomib and dexamethasone.

Patients were administered 8 mg/kg of daratumumab intravenously on days 1 and 2 of cycle 1, and at 16 mg/kg once weekly for the remaining doses of the first 2 cycles, then every 2 weeks for 4 cycles, and every 4 weeks thereafter.

The incidence of grade >3 adverse events was 82.1% in the carfilzomib, dexamethasone and daratumumab group, and 73.9% in the group without daratumumab. Serious adverse events occurred in 56.2% of patients with daratumumab, and 45.8% without.

A total of 5 deaths were reported as treatment-related, all in the carfilzomib, dexamethasone, and daratumumab group—pneumonia, sepsis, septic shock, acinetobacter infection, and cardio-respiratory arrest.

Carfilzomib, dexamethasone, and daratumumab was associated with a favorable benefit-risk profile and can be an advantageous regimen for relapsed or refractory multiple myeloma, even for lenalidomide-exposed and lenalidomide-refractory patients, the investigators concluded.

The study, “Carfilzomib, Dexamethasone, and Daratumumab Versus Carfilzomib and Dexamethasone for the Treatment of Patients with Relapsed or Refractory Multiple Myeloma (RRMM): Primary Analysis Results from the Randomized, Open-Label, Phase 3 Study Candor (NCT03158688),” was presented Tuesday at ASH 2019.