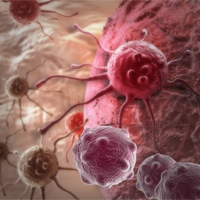 The results of a phase 2 trial examining combination vincristine and irinotecan with or without temozolomide in children and adults with refractory or relapsed rhabdomyosarcoma (RMS) were presented at the American Society of Clinical Oncology (ASCO) 2019 Annual Meeting.

After analyses, the international team of investigators found that the addition of temozolomide to vincristine with irinotecan (VIT) improves progression-free survival (PFS) and overall survival (OS) in patients with relapsed/refractory RMS.

Investigators carried out an open-label, randomized, multi-center phase 2 study of VIT and vincristine with irinotecan without temozolomide (VI) that included 120 patients from 37 European centers from March 2012 to April 2018 with refractory or relapsed RMS. The trial evaluated the efficacy and safety of VI and VIT in patients between .5 and 50 years old. Patients were randomized at a 1:1 ratio, 60 were randomized into the VIT group and 60 into the VI group.

Authors noted that, initially, a Simon 2-stage design was used to analyze separately 40 patients per arm—this was changed and the sample size was increased to 120. A comparison between arms adjusting for compounding factors was added to the statistical plan.

PFS and OS results were similar when comparing only relapsed patients. Adverse events greater than grade 3 were more frequent in the VIT group, but only hematological toxicity was significantly increased (81% for VIT, 59% for VI, odds ratio=1.36, 95%CI, 1.06-1.76, P=0.02).

This study, “International Randomized Phase II Trial of the Combination of Vincristine and Irinotecan With or Without Temozolomide in Children and Adults With Refractory or Relapsed Rhabdomyosarcoma,” was presented at ASCO 2019.