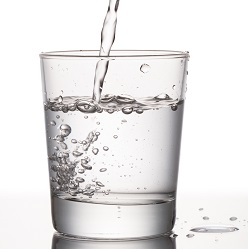 About half of a group is ischemic stroke patients were found to be dehydrated when they arrived at the hospital, a Johns Hopkins Comprehensive Stroke Center team reported—and they did poorly compared to the patients who arrived hydrated.

The problem is that rehydration poses a risk of hypervolemia, which can put stress on the heart and cause fluid to back up in the lungs.

The patients’ progress, or lack of it, was tracked with MRI scans, and NIHSS scores.

Discussing the results, Bahouth said it is already known that about 60% of stroke patients are dehydrated, and that the condition may in itself cause strokes. “When patients don’t drink enough water, their blood gets sludgy,” she said. That could mean that as it travels through the brain, this thicker blood flows slowly and can back up in narrowed or blocked blood vessels.

The Johns Hopkins study did not involve hydrating these patients, but Bahouth thinks that is a topic for future trials.

“The beauty here lies in the simplicity of this potential treatment,” she said, “Rehydration is cheap and can be given to people even in the most remote locations.” But that does not mean these patients should be told to immediately drink water after the onset of a stroke. That could lead to choking.

The research also did not resolve the question of whether the patients’ dehydration signaled other medical conditions that could have contributed to their tendency to have poorstroke outcomes.

Still, Bahouth added, in general, “as people get older they tend to avoid drinking enough water, partly because they don’t want to have to use the bathroom as often—particularly if they have a disability.” That reluctance to drink water could be contributing to stroke risk, she said.

The study found that dehydration in the group of patients followed was not linked to race, gender, ethnicity or diabetes status. Patients with kidney disease were not included in the study.

You May Also be Interested in
Most Popular
The Fear of the Coronavirus, and the Reality of the Flu
Maternal Vitamin D Deficiency Increases Risk of ADHD in Offspring
Hospitalists Taking Advantage of the iPhone
Tonsil Removal Surgery Could Have Negative Impact on Patient Immune System
Navy Medicine: A Strategic Roadmap for Implementing a Virtual Mental Health Program