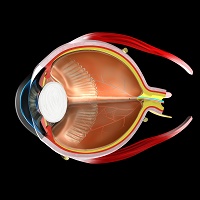 After 12 or 24 monthly injections, ranibizumab (Lucentis, Genentech), one of three currently available vascular endothelial growth factor (VEGF) antibodies, caused regression of diabetic retinopathy (DR) in at least 75% of patients who had diabetic macular edema (DME) and whose DR severity put them at the highest risk of progression to proliferative DR (PDR). This conclusion emerged from a retrospective analysis by baseline disease severity of outcomes of the RIDE/RISE series of randomized phase 3 studies. These studies, which together included 759 patients with DR, compared 24 monthly injections of Lucentis, 0.3 mg or 0.5 mg, with sham injections.

A summary of the results of this analysis was presented by Charles Wykoff, MD, of the Blanton Eye Institute in Houston, TX, at the Association for Research in Vision and Ophthalmology Annual Meeting in Seattle, WA, on May 2, 2016, and published as an abstract in its proceedings. “Anti-VEGF pharmaceuticals given by intravitreous injection have revolutionized management of both DME and PDR and continue to shift our paradigm in many cases from primarily laser-based modalities to pharmacologic options,” Wykoff observed.

He added that the benefits of Lucentis were particularly evident in the one-third of patients in RIDE/RISE who had both DME and moderately severe or severe non-proliferative diabetic retinopathy (NPDR). Like such advanced disease, even less severe diabetic retinopathy “may have the potential to significantly impact our patients’ visual lives,” he noted. As an example, he cited the Los Angeles Latino Eye Study, which found that patients’ quality of life began to deteriorate when “just moderate NPDR” affected both eyes.


Continue Reading (Page 2) >>
You May Also be Interested in
Most Popular
The Fear of the Coronavirus, and the Reality of the Flu
Top 10 Painkillers in the US
FDA Approves IV Meloxicam for Pain Management
WHO Prequalifies First Generic Ingredient for Hepatitis C Medicines
Education is Key in Spreading Awareness of Rare Heart Condition