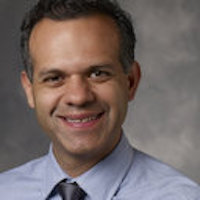 Findings from the massive Apple Heart Study show one-third of participants to be notified of an irregular pulse on their Apple Watch devices had atrial fibrillation (AFib) on a follow-up electrocardiogram (ECG) patch reading.

The trial results, published 1 day prior to the start of the American Heart Association (AHA) 2019 Scientific Sessions in Philadelphia, provide a blueprint of context and potential pitfalls for site-less, remote-based observations involving wearable technology in cardiovascular monitoring.

A team of investigators, led by Marco V. Perez, MD, of the Stanford Center for Clinical Research Division of Cardiovascular Medicine, sought to evaluate an irregular pulse notification algorithms offered by an Apple Watch app, for its ability to detect AFib in users. As many as 700,000 people in the US may have undiagnosed AFib, which carries a 1 in 3 risk of developing in any person during their lifetime.

“Continuous traditional heart monitors or implantable devices increase the detection of atrial fibrillation in populations at high risk,” investigators wrote, “but have limited monitoring periods and require either invasive procedures or activation by the user.”

Perez and colleagues recruited 419,297 participants over 8 months. Each participant, aged 22 years and older, had self-reported no diagnosis of AFib, and consented to wearable device monitoring via an Apple iPhone app.

The smartwatch-based irregular pulse notification algorithm tracked for and identified potential instances of AFib. In the event of a potential flutter, a telemedicine visit was initiated, and an ECG patch was mailed to the participant, with the direction to wear it for up to 7 days.

In 90 days after the irregular pulse and at the study’s end, investigators administered surveys to users.

Of the 1376 participants who returned a 90-day survey, just slightly more than half (57%) contacted their healthcare providers outside of the trial. Investigators reported no instances of serious app-related adverse events.

Investigators noted that, though they were able to exceed 400,000 participants in just 8 months, their reliance for trial data—and even study inclusion—came down to participant willingness to provide insights into their health and status.

“Substantial loss to follow-up results in uncertain validity and generalizability inherent to this design,” they wrote.

Though some participants retrospectively reported a history of AFib after failing to report any at trial’s initiation, investigators mitigated the mistake with enrollment criteria verification at trial visits. That said, this issue shows the challenge of relying so much on participant self-assessment at both enrollment and in outcome collection.

“In the future, studies may be able to leverage health record data directly from smartphones,” Perez and colleagues wrote. “As the number of app-based studies grows, development of methods to maximize engagement and the accuracy of data reported by participants is an important area of investigation.”

Investigators colleagues concluded the data support the ability of the observed algorithm to accurately identify AFib in users with irregular pulses. But a rigorous investigation into this technology, and its use in clinical settings, is very necessary.

“Finally, this study provides a foundation on which further research in digital health can be conducted,” they wrote.

The study, “Large-Scale Assessment of a Smartwatch to Identify Atrial Fibrillation,” was published online in The New England Journal of Medicine.