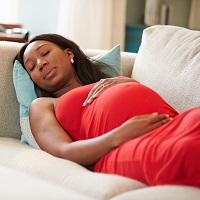 Everyone needs an adequate amount of sleep every night, but it should especially be a priority in pregnant women. However, there is a fine line between too much and too little sleep, but either way, both sides of the spectrum have an increase risk in gestational diabetes.

Presented at the American Diabetes Association (ADA 2016) 76th Scientific Sessions in New Orleans, Louisiana, a new study found that there is an important risk between sleep and risk of developing gestational diabetes.

Unfortunately, sleep problems aren’t exactly uncommon in pregnant women. However, catching enough Z’s plays an important role in having type 2 diabetes later in life. Researchers from the Eunice Kennedy Shriver National Institute of Child Health and Human Development (NICHD) aimed to find the link between the condition and sleep on a trimester-specific basis.

Using a multiracial cohort of 2,334 non-obese and 468 obese pregnant women, the researchers studied a total of 2,581 of them. The women reported their sleep habits during their first trimester (weeks eight to 13) and second trimester (weeks 16 to 22). The durations of overnight sleep were grouped by: five to six hours, seven hours, eight to nine hours, and 10 or more hours. Napping frequency was also taken into account and categorized by: most times, sometimes, and rarely or never. A total of 103 participants developed gestational diabetes.

The amount of women sleeping for 10 or more hours decreased from first to second trimester (24.4% vs. 14.7%). Napping sometimes or most times also decreased (80.4% vs. 54.4%). Sleep during the first trimester did not have an independent impact on the gestational diabetes. However, sleep had a significant effect during the second trimester.

“Only among non-obese women, sleeping more or less than eight to nine hours were both significantly related to gestational diabetes risk,” the authors explained. The ARRs were 2.53 for five to six hours, 1.98 for seven hours, and 2.37 for 10 hours.

Therefore, getting too much sleep is just as risky as getting too little sleep when it comes to gestational diabetes, and napping and obesity can contribute to that risk.