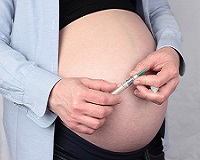 A fair amount of women who are diagnosed with gestational diabetes take active measures to lose weight – but what clinical outcomes does that have? Research presented at the American Diabetes Association (ADA 2016) 76th Scientific Sessions in New Orleans, Louisiana answered this long-time not well understood question.

Gestational diabetes affects the mother while she’s already into her pregnancy. Although the condition doesn’t come with the same birth defects as those who have diabetes before getting pregnant, the baby can develop high blood glucose levels and have macrosomia (“fat” baby). Obesity can amplify gestational diabetes issues, so wouldn’t losing weight help maternal and neonatal health? Well, this area remains a little mixed, according to the researchers from the Magee-Womens Research Institute and the Department of Obstetrics and Gynecology at the University of Pittsburgh and University of Oklahoma.

To uncover these implications, the team examined a cohort of 614 obese women (pre-pregnancy body mass index (BMI) of at least 30 kg/m²) with gestational diabetes. The average participant was 31 years old with a pre-pregnancy BMI of 37 kg/m². A total of 484 women (78.8%) were Caucasian and 111 women (~18%) were African American. Out of the entire study population, 151 women (24.6%) lost weight after their gestational diabetes diagnosis and 463 women (75.4%) gained weight.

The results showed that weight loss was linked to lower post-prandial glucose values. Although macrosomia rates were similar whether the women lost or gained weight, those who lost weight tended to have babies with lower birth weights – after adjusting for factors such as age, BMI, and tobacco use. In addition, the women who lost weight were less likely to undergo a cesarean delivery (37.1% vs. 46%).

However, there were no differences between the groups when it came to hypertensive disorders of pregnancy, neonatal intensive care admission, or neonatal morbidity.

“These results suggest that weight loss after gestational diabetes diagnosis may have benefits with regards to glycemic control and risk for cesarean delivery without significantly increasing the risk for fetal growth restriction,” the team concluded.

You May Also be Interested in
Most Popular
Denise Daley, PhD: Early Asthma Interventions for Infants
Top 10 Painkillers in the US
Investigators Test Combination Therapies for First-Episode Psychosis in Adolescents
What Should I Do With This Abnormal ALT?
Flu Cases Near 30 Million in the US, CDC Reports