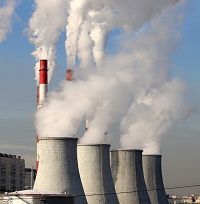 Air pollution affects liver health and can cause fibrosis, according to findings published in the Journal of Hepatology.

Researchers from Wayne State University, Detroit, MI, experimented with the high concentration airborne particle matter called PM2.5 to investigate the effects of air pollution on the liver. Previous research has linked PM2.5 to the liver, causing effects like fibrosis, metabolic disease, and liver cancer. Other research focused on the effects of pollution on lung tissues and the cardiovascular system, but these experts hypothesized that pollution would also be detrimental to the liver. Already the liver acts as one of the body’s detoxification and metabolism centers.

The researchers added that PM2.5 is smaller than 2.5 micrometers and is a mixture of particles and gases from gasoline and diesel engines in addition to dust from roads, tires, and brakes. As such it is the most abundant and most toxic air pollutant in urban areas. Detroit, where the research was conducted, was rated as one of the cities with the most PM2.5 in the country, according to the American Lung Association’s annual air quality reports.

Animal models used in the study were exposed to real world PM2.5 for short and long term periods of inhalation for 10 weeks. The animals developed liver fibrosis. The team also determined stress sensors on the cell membrane that initiate PM2.5 triggered inflammatory stress responses promoting collagen deposition through molecular, cellular, and pathological analyses. The collagen deposition was a trademark of fibrosis and the transforming growth factor beta was also discovered.

“Our work has a major impact on medical care and health policy making for the populations under air pollution environment," research leader Kezhong Zhang, PhD, said in a press release. “Liver fibrosis is an advanced stage of chronic liver injuries caused by chronic hepatitis viral infection, obesity, alcoholism, or autoimmune diseases. Our work defined that air pollution, specifically PM2.5 pollutant, is an independent risk factor of liver fibrosis. This is very significant in terms of identifying new health risk factors and understanding liver diseases. The molecular and cellular mechanisms we revealed in this work have very important implications in clinical disease diagnosis and treatment associated with air pollution.”

You May Also be Interested in
Most Popular
James Wheless, MD: Neurology, Epilepsy, and COVID-19
Flu Cases Near 30 Million in the US, CDC Reports
Jerry Bagel, MD: Starting the Treatment Process for Plaque Psoriasis
Irregular Menstruation in Teenagers May be a Warning Sign
When to Suspect Diarrhea is Symptom of a Clostridium Difficile