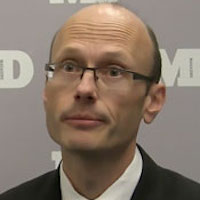 A new study to presented at the American College of Cardiology (ACC) 2019 Annual Meeting in New Orleans, LA, this weekend shows significant real-world benefit for rivaroxaban (Xarelto) versus warfarin for the treatment of ischemic stroke risk reduction in patients with nonvalvular atrial fibrillation.

The Janssen Pharmaceuticals anticoagulant is well-evidenced by the comparative data found among 40,000-plus patients. But other issues persist in the field of atrial fibrillation diagnosis and care. In an interview with MD Magazine®, Paul Burton, MD, PhD, vice president of Medical Affairs, Internal Medicine, Janssen Scientific Affairs, discussed the newest rivaroxaban findings, as well as relevant clinical ventures to come soon from Janssen.

MD Mag: What are the key takeaways from this real-world dataset?

Burton: From what we’ve published in the past, stroke is probably the most feared clinical event among both patients and physicians. They rank it almost the same as death. So, medicine that can reduce the risk of stroke, and stroke severity could be very important. I think this is a very important piece of work, because it’s from a large, real-world patient database. We constantly want to inform people of clinical trial data, but it’s important to see how it’s performing in the real world, and to look for consistency.

The key takeaways of reduced risk of dying from a stroke were also statistically significant. I think the study—in a very large, robust, real-world patient population—shows again that Xarelto is superior and significantly more beneficial than warfarin for reducing stroke. You’re far less likely to die from a stroke with Xarelto, and in patients have a stroke while on the agent, the severity of the stroke is far less. It’ll be a very important piece of data, we think, and important for physicians as well.

What is it about rivoraxaban’s properties and makeup that makes it a more beneficial therapy for stroke prevention?

Obviously, it’s part of that newer class of oral anticoagulant agents. It acts on Factor 10, taking the clotting power away. It acts very specifically there. It has great compliance, just once per day. It doesn’t need monitoring, and it can be taken with other medicines and foods with very few reactions. From the patient’s perspective, it’s a very easy medicine to manage, and it leads to great clinical outcomes.

What is the current state of care for atrial fibrillation, and what needs to be addressed next in the coming years?

Atrial fibrillation is an interesting condition. It’s pretty diagnosable, and the major issue is the risk of stroke—probably between 5% and 10% of patients with atrial fibrillation could have a stroke, which is a devastating event.  It’s treatable, though. You can give a patient an anticoagulant agent and significantly reduce that risk of stroke. Taking Xarelto once per day with some monitoring would be important. With atrial fibrillation, you make the diagnosis, get them on an agent, and then they’ll be protected.

But it’s interesting. Half the patients today who are diagnosed with atrial fibrillation get no treatment. That’s a big public health issue that we have tried to address over the years, with awareness campaigns for the disease, and efforts to increase awareness on treatment options. If you’re not on anything, you’re not going to get the benefit of it. Just getting awareness out there and letting the patients know what the agents are is important moving forward.

We will also be talking this weekend about an interesting collaboration we’re doing with Apple, which was announced back in January. We’re looking to enroll 65-plus year-olds without atrial fibrillation, and have them use the new Apple Watch to see if we can identify patients with atrial fibrillation and follow them to best care. And we think that, coupled with a behavioral change, really should be able to move the needle in healthcare delivery.

I think that’s what the horizon looks like today. You have a great medicine like Xarelto, being proven by great real-world data. But we have to keep increasing awareness in physicians and patients about the disease and treatment options, and looking for innovative programs to help develop more important clinical data.

The study, "A Real-World Assessment of Risk For Severe Stroke and Post-Stroke Mortality in Non-Valvular Atrial Fibrillation Patients Treated With Rivaroxaban and Warfarin," will be presented at ACC 2019.

You May Also be Interested in
Most Popular
Denise Daley, PhD: Early Asthma Interventions for Infants
Picking up the Pace: Progress on Artificial Kidney
Physicians and Patients Need to Discuss the Benefits of Clinical Trials
Physicians Stop RA Medications Too Soon Before Surgery
Cardiac Abnormalities Associated With Charcot-marie-tooth Disease