Smartphone App Notifies of Asthma and Allergy Triggers Nearby 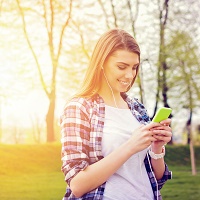 Although smartphones are commonly used to check the latest news articles (or sometimes more so Facebook updates), the technology has the power to do some good in the world of asthma and allergies.

Twenty-four patients used the app from June 2014 to July 2015. They were from all different parts of the United States including New York, Texas, California, Iowa, and Washington. Most of the participants were female and more of them fell into the 25 to 49 age span, although those ranging from 0 to over 50 years were included in the study.

The patients entered their individual asthma and allergy symptoms into the device and a questionnaire determined asthma control. The technology collected environmental data including air quality, climate information, and ambient pollen counts (if available).

Pollen count proved to be the strongest predictor for symptoms, “contributing up to 73.1% of the explained variation for all asthma and allergy events,” the authors explained. “The concentration of particulate matter smaller than 2.5 microns (PM2.5) coincident with patient-entered asthma control was also a consistently strong covariate in individual regression models, explaining as much as 7.3 – 33.2% of the observed variation.”

The team looked at air quality in terms of the common pollutants: CO, NOâ‚‚, Oâ‚ƒ, PM 10, PM 2.5, and SOâ‚‚. In both air quality Ëƒ 2 and Ëƒ 3 standard deviation, CO, PM 2.5, and SOâ‚‚ showed the most prominence. The researchers said that PM 2.5 consistently shows a strong inverse relationship with asthma expression.

Lag time between air quality peak and asthma nadir (low points) was also taken into consideration. “A significantly large percentage of asthma nadirs are preceded by a peak in air pollution by approximately 17 hours,” the team concluded.

Mobile devices have the potential to not only help understand the environment around us, but apply that to improve health conditions. As observed with Asthma Ally, it’s a feasible and valuable strategy. Who knows, it could be coming to an App Store near you…