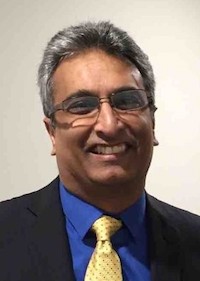 Rajesh Pahwa, MD
Non-invasive nerve stimulation may provide relief from hand tremors for people with essential tremor, according to 2 studies, which will be presented at the 2018 American Academy of Neurology Annual Meeting in Los Angeles.

The treatment, provided through a neuromodulation device worn on the wrist, stimulates the media and radial nerves. The device creates a stimulation pattern that is tailored to interrupt the patient’s tremor. Researchers enrolled participants for an in-clinic study (n=77) and an at-home study (n=61). All participants had essential tremor (ET), a condition that affects hands, head, and voice.

In the clinic, physicians evaluated patients for tremors both before and after a session with either the neuromodulation device or sham treatment. These assessments showed that participants in the stimulation treatment group saw a 65% improvement compared to 32% in the sham treatment group.

“The study conducted in the clinic showed that treatment stimulation was safe and produced significant improvements in both physician-rated and patient-rated measures of tremor severity compared to sham stimulation,” said study author Rajesh Pahwa, MD, of the University of Kansas Medical Center in Kansas City and a Fellow of the American Academy of Neurology.

No significant adverse events occurred in either study. Just 3% of participants reported mild adverse events, such as skin redness or irritation, which resolved without intervention. The therapy has few side effects when compared to other available treatments, Pahwa said.

Other treatments for essential tremor include brain implants that deliver electrical pulses to stimulate the brain. However, studies of this device in patients with essential tremor and Parkinson’s disease reported serious adverse events including intracranial bleeding, potentially leading to stroke, paralysis, or death.

Researchers are investigating treatments like the wrist-worn stimulation device as alternatives to the implants that carry risks of adverse events. Another non-invasive alternative currently being studied is magnetic resonance imaging (MRI)-guided focused ultrasound to target the brain. The MRI creates a heat map that doctors use to aim the ultrasound. The treatment is performed while patients are alert and able to provide feedback.

“For people with Parkinson’s disease and other movement disorders such as essential tremor, focused ultrasound is an appealing alternative to deep brain stimulation because it does not involve more invasive surgery,” said Paul S. Fishman, MD, PhD, professor of neurology at the University of Maryland School of Medicine and a neurologist at University of Maryland Medical Center.

Over 7 million people in the US are affected by the essential tremor, which can cause problems with daily activities such as eating, writing, and shaving. The condition, which is the most common tremor disorder, can be severe enough to become disabling.

“Our research suggests that this non-invasive therapy may offer meaningful relief from the symptoms of hand tremor for people with essential tremor,” Pahwa said.

These studies were limited by small groups of participants and a short study period. Future studies will need to enroll greater numbers of patients with a longer follow-up duration.

You May Also be Interested in
Most Popular
The Fear of the Coronavirus, and the Reality of the Flu
Jamak Modaresi Esfeh, MD: Finding Hepatic Encephalopathy
Treat Parkinson's Disease with a Cancer Drug
Young Mothers Face More Mental Health Hurdles
Top 10 Painkillers in the US