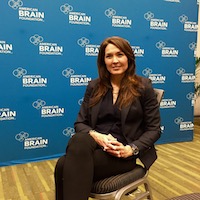 Editor’s Note: Susan Schneider Williams, spouse of the late Robin Williams spoke with MD Magazine about the several symptoms the actor presented up to a year before his death that made it difficult to diagnose what he was suffering from: Lewy Body Disease (LBD).

MD Magazine: Can you tell us your story and the background of Mr. Williams’s final year?

SSW: There are over 40 symptoms of LBD and Robin had nearly all of them. And, it’s such an incredibly complex disease to diagnose, because there are so many symptoms.

Robin, about a year before he passed, started to exhibit symptoms that we spent about a year chasing. Those symptoms seemed unrelated, and he and I both felt there was something terribly wrong. He was clinically diagnosed with Parkinson’s disease in May and was exhibiting symptoms by then, slow shuffling gait, tremors in his left arm, and a weakened voice, which was crushing for him. Also, Robin was experiencing a gut discomfort - the doctor actually thought it could be diverticulitis.

Prior to that, he had been suffering from increased anxiety and fear, which I found out later, was a hallmark of LBD. Over 40 symptoms were presenting and depression is only one of 46. Robin wasn’t depressed for a long time; however, it was part of his previous history, which adds to complications when doctors are trying to diagnose. And to further complicate things, LBD symptoms do not all present at once – it’s like looking up at a bunch of stars and trying to figure out the constellation that they make. So, when we got the Parkinson’s diagnosis in May, we thought, ok, this is it.

Yet, pathologically he had diffuse LBD. Nearly every region of his brain was suffering – it was one of the worst pathologies they’d ever seen. But, we didn’t find out about the LBD until three months after he passed when they reviewed the coroner’s report with me.

MD Magazine: So, the coroners were not specifically looking for LBD?

SSW: No, they just found it afterwards. I had no idea; we thought it was Parkinson’s. Our whole medical team was on the right track, and we would’ve gotten there. Just before Robin left, we were trying to decide where he would go for inpatient neuro cognitive testing in order to evaluate the mood aspect of his Parkinson’s diagnosis.  And we were very close to selecting a place in the country to do that.

So, geniuses like Robin are able to stave off the initial symptoms longer, because the brain’s able to compensate. But what happens is, suddenly the dam breaks and the decline is very dramatic. And, that’s what we witnessed – the symptoms were spiraling out of control.

MD Magazine: If the doctors diagnosed Mr. Williams of LBD prior to his passing, how would the treatment have changed?

SSW: Again, we were close. If we made it to the inpatient neuro cognitive testing where he would have stayed to explore the mood disorder aspect, the treatment would have probably used different drugs.  I can tell you there would be certain things that you don’t do.  Like, you don’t give someone with LBD anti-psychotic medication. The treatment would’ve been altered, and the sad thing is there is no cure, and the decline can be very rapid.