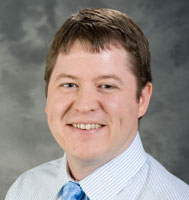 Daniel J. Jackson, MD
While it is common practice to increase doses of inhaled glucocorticoid controller therapies when early signs of asthma control loss are observed, it appears the custom may be in vain.

In a presentation at the 2018 American Academy of Allergy, Asthma, and Immunology (AAAAI)/World Allergy Organization (WAO) Joint Congress in Orlando, Florida, data from a study led by Daniel J. Jackson, MD, an associate professor of pediatrics at the University of Wisconsin School of Medicine and Public Health, in Madison, revealed that children with mild-to-moderate persistent asthma did not benefit from a quintupled dose of their inhaled controller therapy.

The population studied was a cohort of 254 children with persistent asthma, aged 5 to 11 years, that had experienced at least 1 exacerbation that was treated with systemic glucocorticoids in the past year. Each patient received 48 weeks of treatment with low maintenance doses—44 µg per inhalation, twice daily—of fluticasone propionate, and was randomized to receive, upon the early signs of uncontrolled asthma (defined as “yellow zone”), either the same dose (low-dose group) or a quintupled dose of 220 µg per inhalation twice daily (high-dose group).

Rates of asthma exacerbations were not significantly different between the 2 groups, with the high-dose group averaging 0.48 per year and the low-dose group averaging 0.37 per year (relative rate, 1.3; 95% CI, 0.8–2.1; P = .30). Additionally, the time to first exacerbation, rates of treatment failure, symptom scores, and albuterol use also did not differ significantly between the high- and low-dose groups.

"This study allows caregivers to make informed decisions about how to treat their young patients with asthma," James Kiley, PhD, the director of the National Heart, Lung, and Blood Institute's Division of Lung Diseases, which funded the study, said in statement. "Trials like this can be used in the development of treatment guidelines for children with asthma."

The authors acknowledged that there were fewer yellow-zone episodes observed than anticipated, as well as 40% fewer exacerbations than expected, although the reasons for this were reportedly unclear. This, Jackson and colleagues admitted, lowered the power of the trial to detect a difference between groups.

To date, only 1 randomized clinical trial involving pediatric patients and budesonide-formoterol has shown benefits for the increase in inhaled glucocorticoids during yellow-zone episodes, according to the authors.

The study, “Quintupling Inhaled Glucocorticoids to Prevent Childhood Asthma Exacerbations,” was published simultaneously in the New England Journal of Medicine.

You May Also be Interested in
Most Popular
Denise Daley, PhD: Early Asthma Interventions for Infants
Insufficient Data to Accurately Monitor Most At-Risk Communities for Flu
When to Suspect Diarrhea is Symptom of a Clostridium Difficile
Top 10 Painkillers in the US
Visual Impairment, Dementia Are Detrimental to Independence of Older Adults