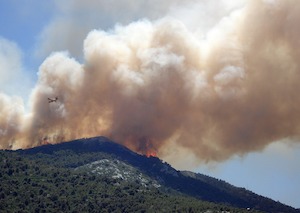 Investigators found a significant difference in immune outcomes in 7-year-olds after prescribed fires compared to wildfires.

These results, which were presented at the 2019 Annual Meeting of the American Academy of Allergy, Asthma & Immunology (AAAAI), came from a study of children in Fresno, CA who lived 70 miles away from a prescribed burn (n = 32) or 90 miles away from a wildfire (n = 36).

“The body’s immune system is in a state of constant flux, with various cell types increasing or decreasing depending on what the body is being exposed to,” said first author Mary Prunicki, MD, PhD, Stanford University, Stanford, CA, in a statement. “In this study, we found that there were more Th1 cells in children who were exposed to the wildfire smoke, which was more pollution exposure overall. These cells are in a state of balance with other cells and dysregulation can lead to changes in the body’s response to allergic diseases, such as asthma, rhinitis, hay fever, and food allergy.”

Investigators tested the participating children 3 months after either the prescribed burn or wildfire occurred. Of the children tested after the planned burn, 38% (12/32) had asthma; of those tested after the wildfire, 25% (9/36) had asthma. They collected blood samples, blood pressure, and performed pulmonary function tests (PFTs).

Linear regression models were used to analyze the data from the 2 groups of children. These models were controlled for age, sex, BMI percentile, race, smoke exposure, and the children’s asthma status.

“Pollution is associated with an increase in methylation of the Foxp3 gene, which renders the gene less active and therefore, fewer immunoregulatory cells are produced,” Prunicki added. “The result is that the body is less able to keep immune homeostasis and may predispose the child to increased allergic disease.”

Prunicki noted that a limitation to the study was that they were unable to distinguish between pollution caused by the wildfire versus other pollution.

“Prescribed fire is a critical tool to increase the resilience and health of our fire-prone forests,” said Rodd Kelsey, PhD, a co-author and lead scientist with The Nature Conservancy of California, addressing the importance of this research. He added that public concerns about the impacts of smoke can be a barrier to increasing the use of planned, controlled fires.

“Our hope is that, through better understanding of the comparative public health impacts of prescribed and unmanaged wildfire, we will be able to get more good fire on the ground in a way that benefits both nature and people," said Kelsey.

The abstract, “The Impact of a Prescribed Burn versus a Wildfire on the Immune and Cardiovascular Systems of Children,” was presented at the Annual Meeting of AAAAI on Saturday, February 23, 2019.